Home Places THE LONGEST ZIPLINE IN THE WORLD
PlacesTravel

THE LONGEST ZIPLINE IN THE WORLD 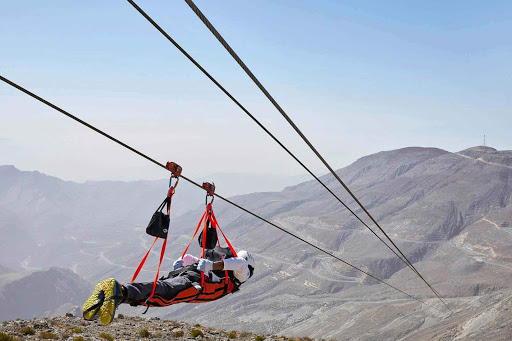 The longest zipline in the world is named the Jebel Jais Flight zipline.

This zipline won the Guinness World’s Record, beating the previous 1.5-mile holder, “The Monster,” by 1,968 feet.

To put that length into perspective, it’s longer than the Golden Gate Bridge, and the same length as 29 Big Bens stacked on top of each other.

This zipline will send users traveling at speeds of 90 mph. Now that’s a thrill ride!

Are you brave enough to strap into the Jebel Jais Flight zipline?

It's the Stairs of Death, located in Huayna Picchu, Peru, and it certainly is a breathtaking experience. Not only is it 600 feet of...
Read more
Places

WATCH THE SUNSET TWICE AT THIS HOTEL IN DUBAI

THE ESCHERIAN STAIRWELL IN REAL LIFE

You know MC Escher, the creator of the Escherian stairwell effect, also know as Ascending and Descending’s staircase... Where you walk up endless steps and get nowhere. It's a common impossible objects illusion that's been around since 1960, and now, it's brought to life in this crazy video below. Watch and be amazed...
Read more